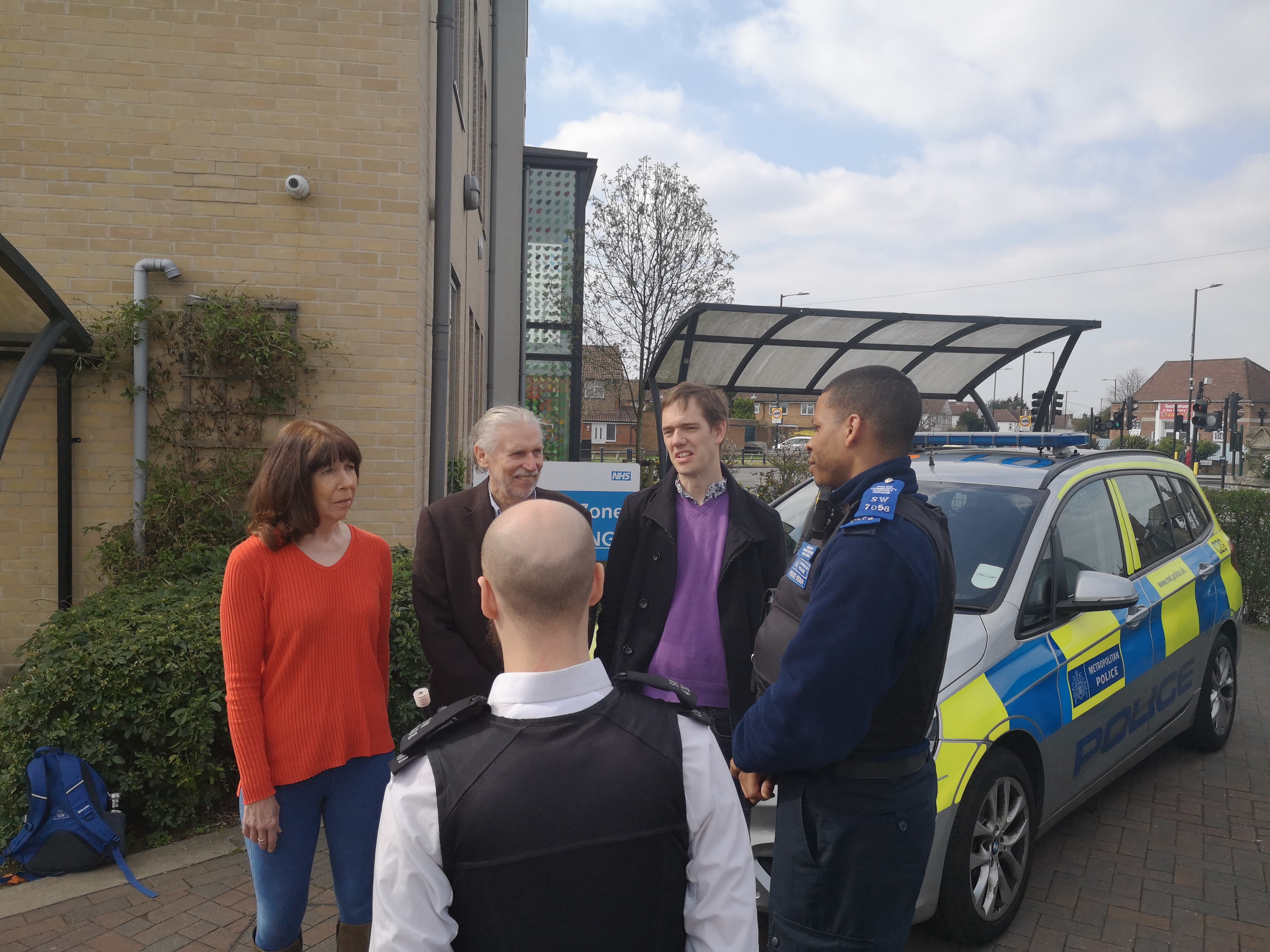 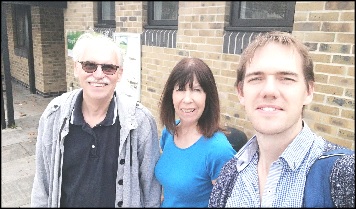 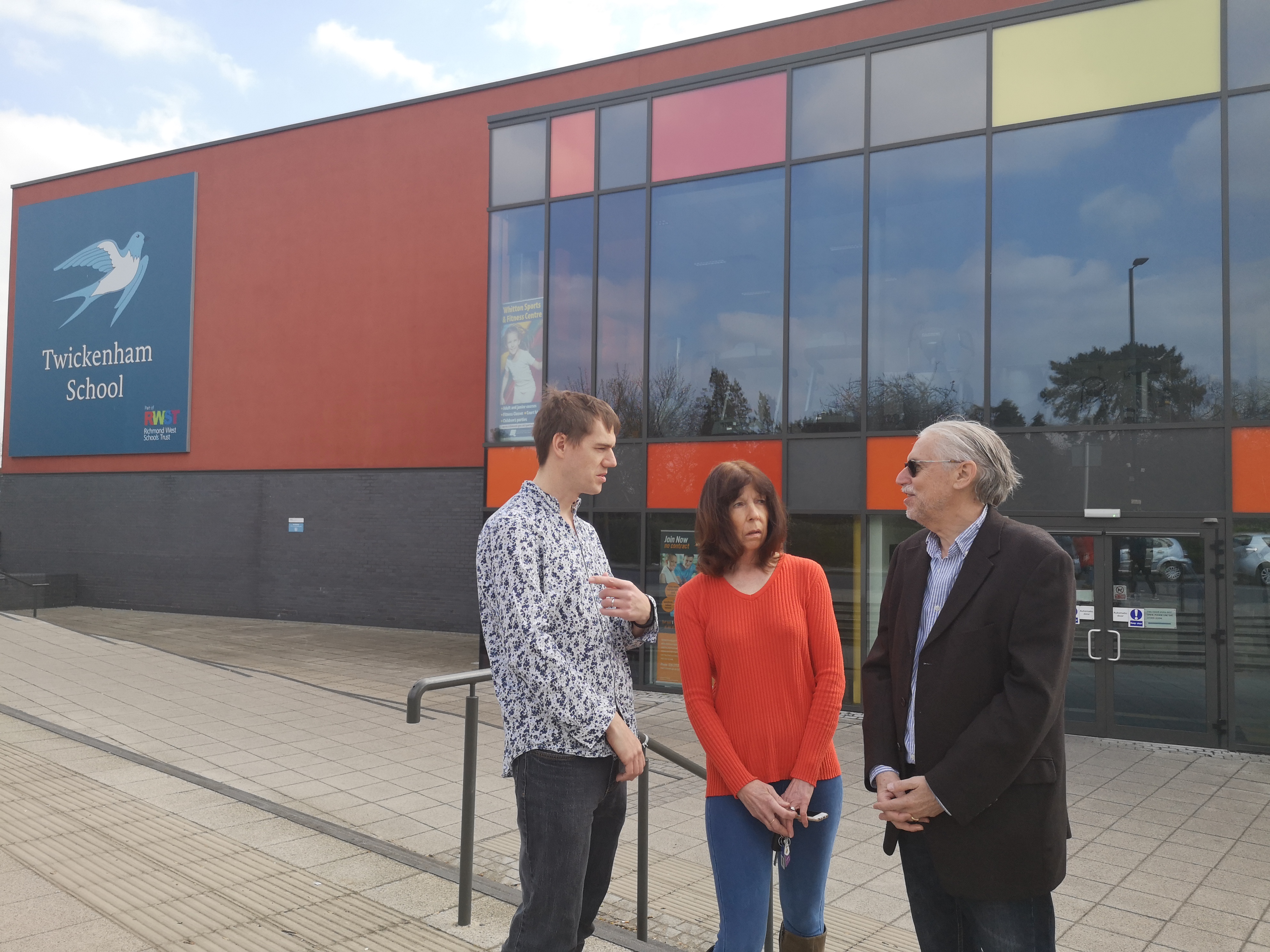 ● Lib Dem Councillors talking to the local police team (L), visiting the Hounslow Heath Community Centre to look at improving library services (centre) and your local team outside Twickenham School (R).
1) Whitton Station Controlled Parking Zone
A Controlled Parking Zone (CPZ) around Whitton Station is being proposed, following a successful campaign by residents to tackle problem parking.
The roads that will be included are Montrose Ave, Ryecroft Ave, Blandford Ave, Jubilee Ave, Pauline Crescent and Cherstey Rd. These roads had 50% support from residents.
Cllr Michael Wilson said, "I know a number of residents have had issues with commuter traffic for some years and the problem has got worse and worse. Given Whitton is the only mainline station in the borough without a CPZ, I hope this CPZ will improve parking locally”.
The CPZ will come into force this summer and operate between the hours of 10am and 2pm, Monday to Friday. These streets will also be added into a rugby event zone as a majority of residents in these streets supported the introduction.
Cllr John Coombs added, "There will be a review six months after the implementation in order to consider if the CPZ area needs to be extended or the hours increased. We will work with residents during the process and keep them up to date as the CPZ is introduced"
2) Improving local Library Services
The Lib Dems are committed to improving local library services. This comes 8 years after the Conservative Council closed Heathfield Library.
As well as increased investment into the recently refurbished Whitton Library, the Lib Dems are going to introduce a click and collect service from a Hanworth Road or Powder Mill Lane shop and provide a new resource of children’s library books at the Hounslow Heath Community Centre.
Cllr John Coombs said, “The access point project is a failed Tory plan after they closed our old library and cancelled provision of a new library. This idea is such a failure it now costs taxpayers about £50 per book loaned. In contrast the Lib Dems are introducing plans to improve access to books across the wider area”.
The biggest bulk of users were from Heathfield School and those children are happy to use Whitton Library. Elderly people can also use the drop off service provided by volunteers. Do let Councillors know of a shop who would be interested in taking part.
Cllr John Coombs added, “The previous Tory administration also had plans for closure of the access point, but the Lib Dems have now made sure there is an improvement for users across our area”.
Also, a new community space is soon to be opened at Whitton Library which will be available for local groups to hire. Following comments last year we have also managed to have air conditioning installed at our library as part of this provision.
3) Turing House School update
The Greater London Authority has given its initial response to the planning application submitted by developers of Turing House School.
The School and the Education Skills Funding Agency (ESFA) is pushing ahead with plans to build on Metropolitan Open Land just off Hospital Bridge Road, despite concerns from residents, local councillors and now the London Assembly.
Cllr Lesley Pollesche said, "The ESFA and developers have been told they need to consider traffic and congestion concerns, the quality of the building proposed and of course the loss of Metropolitan Open Land which could contradict local and regional planning policies".
The planning application was expected to be judged last year, but still no news on a likely committee date. Even if passed locally, the Mayor of London will have to give his approval to any modified scheme. The sale of land by Labour controlled Hounslow Council has not yet been completed, but will be subject to planning approval.
Cllr Michael Wilson added, “We are working with local residents to stop Turing House School being built on this site. We believe the increase of traffic and congestion will be too great, plus the impact on Twickenham School will be detrimental to the long term improvements that are taking place for local school children.

The Lib Dem council has agreed an extra £100,000 cash injection for community safety in the latest budget.
This will enable the council’s community safety team to develop further measures to complement the police’s efforts to tackle crime and, importantly, to bring communities together to address these issues in partnership.
New digital platform
The investment will be spent in part on supporting and developing neighbourhood watch, in particular the rapid sharing of information. A new, secure digital platform will be set up to improve communication and the flow of intelligence. This will make the most of what is already an extensive neighbourhood watch network, that works hard to keep people safe and informed.
There will also be more targeted work with known offenders to reduce repeat crime, and an enhanced programme of crime prevention work.
Cllr Lesley Pollesche said, “Clearly the government and the Mayor of London need to invest more in our police. We will however do what we can as a community to help our excellent local officers bring down crime levels.”
The next local police liaison group meeting will be held on June 13 at St Philip and St James at 7.45pm. You can contact team via email [email protected] or visit them at their regular community contact sessions at Whitton Community Centre.
Cllr Michael Wilson added, "When speaking to local people this is the top local issue and we welcome this additional investment to make our community safer".

5) Weekly bin collection retained
The Lib Dems are keeping weekly bin collections despite Tory scaremongering at the last election.
They are also pressing ahead with improving recycling by trialing food waste collections from flats and recycling points for electric and electronic goods in libraries including here in Whitton
Cllr Lesley Pollesche said, "When our council was under Conservative control recycling flat lined. Some councils move to fortnightly or even three weekly collections. Not us”.
A domestic new waste and recycling contract will commence in 2020. As part of it, new vehicles will be sought, to ensure that collections are consistent.
6) Electric vehicle charging points
The Lib Dems are helping people to switch to electric cars, which are less polluting than petrol or diesel vehicles. However, for those without off-street parking, charging can be a headache. The Council is rolling out two types of charging points to help. Lamppost chargers have a lower charging speed and come without dedicated parking bays. Faster, pavement mounted units, have dedicated bays to be used only when charging. The council is currently consulting on a EV Charging Point on Ryecroft Avenue, Grafton Close, Hospital Bridge Road, Nelson Gardens, Simpson Road and Springfield Road. Have your say by visiting https://bit.ly/2Y6OlCQ
7) Action to deliver safer roads
The Council is bringing forward an amended 20mph Borough wide limit in order to improve road safety.
Over 10,000 people took part in the consultation and over 52% of people said the proposal would improve road safety. The original plan was narrowly opposed by 171, as a result the plan is being amended to take into account some of the concerns expressed.
Cllr John Coombs said, "I'm delighted we are delivering on a key election promise to make our roads safer. I'm also happy to know that we have listened to local people and made some changes. Although we were disappointed with the turnout in Heathfield ward, we suspect one of the reasons for that is we have several 20mph zones and physical traffic calming measures in place”.
Some residents questioned if our area or certain roads could have been left out.
Cllr Michael Wilson said, "At the last election, this proposal had cross party support and only 3% of residents in our area opposed the plan during the consultation. Our main roads have schools, parks and the train station located on or near to them which means higher numbers of vulnerable road users on them regularly”.
Cllr Lesley Pollesche added, “The Council will commission an independent air quality assessment around the scheme. This will help decide whether 20mph has a good, bad or neutral effect on air quality”.
8) 310 Nelson Road
Work on this abandoned property has been progressing very slowly. Residents will have recently noticed a new roof appearing. We continue to push the developer to finish the work and to look after the area while the works are being completed.

Work to improve local pavements and highways based on NEED and not competition amongst residents, continues in our area. Work is beginning on roads including Heathside, Ellerman Avenue and Lyndhurst Avenue. Road resurfacing is also planned for Nelson Road and Percy Road. Borough pavements and roads are set to benefit from an extra £100,000 invested through this year’s budget.